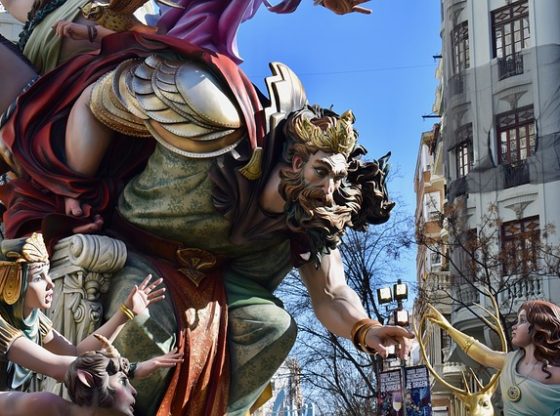 This festival (Fallas) has been celebrated since ancient times, nowadays it is a major tourist attraction. The city is full of light and “ninots”, but also there is organised large musical events with performances by Fangoria, Pignoise and Melendi.

After “Crida”, indicating the start of the festivities, which takes place on the last Sunday of February, we begin the “Mascletà”. It consists of a set of firecrackers, lasting 5-7 minutes causing a lot of noise. Although this celebration is well known, there are visitors that they don’t understand the meaning of this activity.

Going back to history, some say that a guild of carpenters were the ones who started this festival. They burned at the stake their utensils and their old leftover for starting again in spring. They did it (patron of Carpenters) St. Joseph’s Eve. Others say it was a cult of fire. We should also mention that the figures that were formerly usually satirical and burlesque have been modified to reach a more artistic. So today, besides the “ninots” show their mocking, there are awarded prizes for best decoration and elaboration.

Let’s describe a little more about the celebration of the “Fallas”, every day is special. On March 15th, is when the “Plantà” is done. It is the moment when the gigantic figures are known to the public. It is the big expectation. They start with the junior category. And the next day, it’s time for the “Plantà” of Senior category. Not to be missed. The landscape of the city is spectacular. The magnitude of the “ninots”, decor and the burlesque representation will dazzle you.

Following the celebration, the 17th and 18th of March is the day of the Offering. Thousands of “falleros” offer a bouquet of flowers to the Virgin of Helpless. It is the patroness of the city and the Valencia Community. Each branch deposit creates a large blanket of flowers. To finish the event, the main “Fallera” is who decommissioning and files in front of the Virgin.

On the evening of March 18th is organized “La Nit del Foc”. A pyrotechnics show. These fireworks are amazing because of their brightness and colour in the sky. In an instant, you are involved by gunpowder and smoke.

On March 19th: And finally, the last day. The Burn (“Cremà”) denotes the end of the holidays. They burn all “ninots”. After many months of work, everything is buried in ashes. During the afternoon, passing the Fire Parade, announcing that the monuments will be burned. It is a festival of fire mixed with acrobatics. They start to burn the Junior “Fallas” and they finish with the Senior “Fallas”. The winner “Falla” is the last to fall.

Visit Valencia for an unforgettable experience accompanied by the enthusiasm of its people and its cuisine.