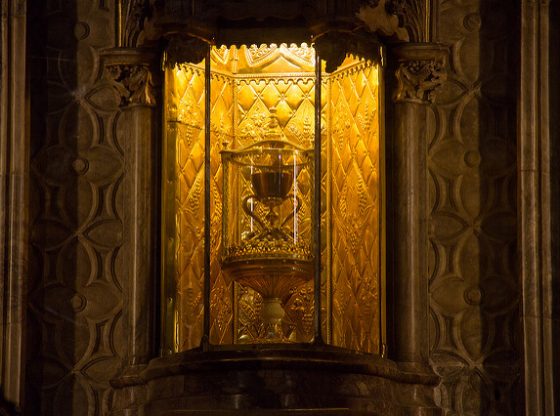 The Holy Grail or the “Chalice of the Eucharist“. There are many theories about this, as it was the cup in which Christ consecrated his blood at the Last Supper. To be guarded, this calyx went from hand to hand until the trace was lost. About twenty glasses were called the genuine, but only one was verified as the original, the Holy Chalice of Valencia.

It’s known as the “Chalice of the Eucharist”, which for centuries was a subject of literature and history. So much so that several versions emerge about what the Holy Grail is, some think that the Grail is part of chivalric literature, others believe that is a myth or legend, while some others believe that it’s a mystery that must be resolved. To understand better the history of this artefact, let’s begin by explaining the literary meaning where it began to be a topic of interest to readers.

History of the Holy Grail

Chivalric literature dates back to the Middle Ages, a period characterised by a profound religious sense of the European inhabitants. It is through these texts that the Holy Grail begins to be mention as a cup where Christ consecrated his blood in the Last Supper, which would later give drink to the disciples, a tradition that would extend over the years reaching the Christians of nowadays.

It’s also believed that the same vessel was later used by Joseph of Arimathea to collect the blood shed by Jesus after his passion and death. According to this literature, a few years later, Joseph took this chalice with him and formed a group of knights who had the mission to guard it.

After a few years, the Grail became a precious stone, which at first was guarded by angels, but then came into the hands of knights’ warriors. These knights were known as the Knights Templar Order. There are not much information about them; it’s is said that they were monks-knights who fought to defend this Holy Grail and the Christian kingdom of Jerusalem. Their bad reputation grew by the ferocity of their battles and the high number of wild crimes attributed to them. Today their bad reputation remains, but perhaps not knowing the true story of them.

According to the legend, every Good Friday, the Holy Spirit descends and renews the virtues of this precious stone, and sometimes inscriptions appear on the stone telling those who are called to eternal happiness in the city of the Grail in Montsalvat. However, this is considered as a mere legend since it has no foundation and not even nowadays can show real evidence. This version is a mixture of literature, reality, myth and fantasy, which open the way to discussions about the existence of the Holy Grail.

Another point of view about the Holy Grail is that of those people who believe that it is a purely personal matter or an investigation of one’s being. Others think it is related to old legends and fertility rites. The truth is that there are many visions of the Holy Grail, which lends itself to confusion and different positions about it. Regarding this Grail, there is a more important issue, and that is its history and the current Location of the Holy Grail.

The Current Location of the Holy Grail.

Undoubtedly, the facts are intermingled with false information and legends that are shuffled in the investigations and hinder the possibility of reaching the truth. The story begins with St. Peter, instituted by Jesus Christ himself to be the first representative on earth; he took the Holy Grail to Rome to use it during the celebration of Mass. In contrast to the version of Joseph of Arimathea mentioned above, an important key is found to deduce the whereabouts of the Holy Grail by a known event that occurred during the Papacy of Sixtus II.

Because of the danger that the Holy Grail would fall into the hands of the Romans, the High Pontiff granted one of his disciples, named Lorenzo, the Grail to guard it. In turn, he transferred it to a Spanish soldier to take him to a Spanish city, where his family would defend it since he would suffer martyrdom, and thus would become San Lorenzo.

By the sixteenth century the trace of the real Grail had already been lost; on the contrary, there were about twenty cups, all of which disputed the place of the true Grail. Nowadays, only two are considered as authentic, without being able to define well which is the true one. One of them is the Holy Chalice of Valencia, and the other is the silver cup of Antioch.

Both glasses have been objects of investigation. Regarding the silver Cup of Antioch, it’s said that it is too heavy to have been passed from hand to hand during the last supper of Christ and his Disciples. Nevertheless, San Jerónimo tells in one of his stories that in the table of that night there were two Cups, one of silver that contained the wine, and another of stone that served as an accomplishment of the Sacrament of the Eucharist.

However, the Grail of Valencia is the one that meets the highest number of requirements. It’s the one that matches the description of San Jerónimo. The Holy Chalice of Valencia is the real one, and there are no theories against it. And the current location of the Holy Grail is the Cathedral of Valencia. The Spanish Church was custody of the sacred Cup for several centuries to the present, having to pass difficult times like the Muslim invasion, and Spanish civil wars.

Are you planning to spend your next holidays in Spain? We recommend going to Valencia and visit the Cathedral of Valencia as it is the current location of the Holy Grail. Tell us what you think about this post. Comment.

A Bicycle Adventure: The best Cycling routes in the USA
Fabulous Zanzibar Holidays: Christmas and New Years Eve in the Spice Island.
This website uses cookies to improve your experience. We'll assume you're ok with this, but you can opt-out if you wish.Accept Reject Read More
Privacy & Cookies Policy