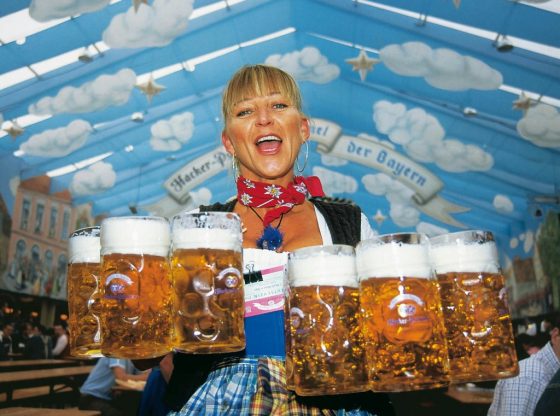 Oktoberfest Munich: the feast of the world’s most popular beer

Year after year the Oktoberfest Munich welcomes thousands of visitors from all over the world. The world’s most popular beer festival is celebrated every year in the city of Munich for 2 whole weeks between late September and early October.

These are the upcoming dates for Oktoberfest Munich:

The Oktoberfest Munich celebration began in 1810 as a wedding party of two members of the Bavarian royalty, Ludwig I and Therese of Saxony, who, after their marriage, offered to citizens of Munich a beer -based party. From that year the Oktoberfest Munich has been held every year.

The Oktoberfest Munich is held in an area named the Theresienwiese which is a large meadow which is very close to the centre of Munich and to the Central Railway Station.

Here are mounted several tents and pavilions and the all serve beer, but not any beer: in fact, only the beer that meets the requirements of the Reinheitsgebot, the law of purity of beer of 1516 which establishes the ingredients for brewing beer, and must also have a minimum of about 6 % of alcohol. Beer must also be made within the limits of the city of Munich.

Brewers Oktoberfest Beer allowed to produce beer under the criteria of Reinheitsgebot are:

Add this Infographics to your web page copying this code:

The entrance to the halls of the Munich Oktoberfest is free and you will not need any ticket to enter. Due to this reason and to the great influx of visitors is very advisable to reach the halls very soon, even in the morning on weekends, especially why if you cannot find a seat you’ll not be served a beer. The Oktoberfest serves beer from 10 in the morning until 10:30 in the evening from Monday to Friday and during the weekend they start earlier, from 9 in the morning. What you have to pay is the beer, which cost around 12€ for a litre. And do not ever ask for a pint … here they only serve litre glasses!

The Munich Oktoberfest parade begins with the owners of the breweries with great beer barrels loaded into carriages, and when the mayor opens the first barrel of beer at twelve o’clock, the festival is inaugurated after twelve guns from the stairs of the statue representing Bavaria.

The Oktoberfest is an event which attracts people from all over the world and in recent years has come to have more than seven million visitors. Munich during those two weeks multiply by 3 the population and even more so all hotels in Munich are full of guests and it is advisable to book a hotel in advance to find a room and good prices.

If you are a beer estimator you cannot miss the Oktoberfest Munich, the largest beer celebration worldwide, but you should know that Oktoberfest is organized in several cities ill around the world.

Here are other cities in the world which celebrates Oktoberfest: