Tourism in Milan: A sightseen in Milan

Home /Europe/Italy/Tourism in Milan: A sightseen in Milan 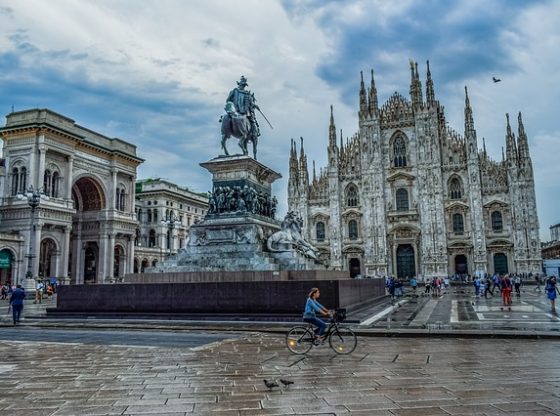 The vast majority of tourists travel to Italy to visit its great artistic gems, especially the most popular and famous cities in Italy: Rome, Venice and Florence. But Italy offers many more possibilities for a weekend getaway in a city such as Milan. The capital of Lombardy is a city well known for its industry, for fashion, for football … but just a few know that it also hides a tourist facet that has little to envy to the major cities of Europe. Tourism in Milan can be a surprising experience, especially if you consider that the idea most parts of people have of Milan is of an unattractive and grey industrial city. But it’s totally different from reality!

Milan is a city with lots of history (as the whole of Italy!). Was founded in the seventh century BC by the Celts with the name of Mediolanum and has since become one of the busiest commercial centres of the old continent. And it is precisely because of the prosperity generated by the business that Milan could finance the construction of its most representative monument: the Duomo, Milan Cathedral. If you’re sightseeing in Milan this great cathedral is a must.

Milan Cathedral, in gothic style, is the fourth largest in the World after the Seville Cathedral, the Cathedral of St. Paul’s in London and St. Peter’s Basilica in Rome. This is located in Piazza del Duomo, Milan centre and it figures out both for its peculiar shape as well as for its colour, almost white.

Best of Milan Duomo is the huge stained glass windows inside the Cathedral and the possibility to lift to the roof from where, on clear days, you can see up to the snowy Alps. From there you can also have a look to the symbol of the city of Milan: the “madonnina“, a golden statue of the Virgin Mary overlooking the square from the highest pinnacle of the Duomo.

Once you have visited the roof of the Duomo you should visit the Vittorio Emanuele II Gallery, right next to the church, a shopping centre noted for its roof, especially in the Christmas period, during which glows in a very nice way. And in the Vittorio Emanuele II Gallery you must step on the balls of the bull and make 3 turns if you want to be lucky: this is a tradition of Milan which consists in step on the lower parts of the figure of a bull on the floor of the gallery, very popular among tourists.

In the Piazza del Duomo also have the opportunity to visit the Royal Palace Museum which hosts many temporary art masterpieces and the Arengario Palace, which now houses the Museo del Novecento (XIX century museum). Before leaving the area of Piazza del Duomo do not forget to make a stop at Luini, in Via Santa Radegonda 16, where you can enjoy one of their famous “panzerotti“. Don’t you know what is it? Discover it there!

Once here you can choose between two routes: to reach the end of the gallery and lead to the Piazza de la Scala, where you’ll see the Scala theatre, one of the most important in Europe, or can head to Via Orefici passing close to the Loggia dei Mercanti to Piazza Cordusio and from there directly head to the Castle of Milan, which shape can be seen from Piazza Cordusio through the pedestrian via Dante.

Sforzesco Castle of Milan is divided into large courtyards and hosts three museums, the most notable of all is the Historical Museum or Museum of Ancient Art. The other two museums are within the castle are the Museum of Applied Arts and the Archaeological Museum. Just behind the castle is Sempione Park, the city center park, where you can walk in free car space and attend spontaneous music shows.

In the Sempione Park, there also is the Arch of Peace, built by order of Napoleon Bonaparte, and the Museo della Triennale, foundation of modern art, design and architecture which shows projects of some of the most renowned architects in the world, such as Renzo Piano or Massimiliano Fuksas.

From here you will head to Piazza Cadorna, near which is the Basilica of Sant’Ambrogio, the second most representative Milan church dedicated to the patron of the city and, within walking distance, there is the most striking work of art in Milan: the Last Supper by Leonardo da Vinci.

To visit this masterpiece of genius Leonardo da Vinci, which also is located in the beautiful church of Santa Maria delle Grazie, in Corso Magenta, book your tickets well in advance on the official website: vivaticket.it .

After a busy morning of tourism in Milan, perhaps you would like to have a break and make some shopping in Milan: this is a must if you visit the fashion capital.

But if art is what catches your eyes in Milan you also have the opportunity to visit two galleries: the Pinacoteca Ambrosiana, the oldest museum of Milan, and Brera Art Gallery, one of the most important art museums in the world with paintings by Raphael, Titian, Caravaggio…

Strolling tourism in Milan you can also visit the area of Porta Ticinese area of the city that melts business, culture, tourism and leisure: many shops, some very original, many nightclubs, especially in the area of Navigli, and many monuments.

The most important monuments of Porta Ticinese, apart from the Porta Ticinese, are the columns of San Lorenzo and the Basilica of the same name plus the Darsena, the old river port where the last two water communication ways of Milan still works. These canals date back to the fifteenth century, the work of Leonardo de Vinci.

Visiting Milan is also visiting its doors: up to 11 doors had Milan, some of which are still intact and can be visited. The most famous are Porta Romana, Porta Ticinese, Porta Venezia, Porta Nuova and Porta Garibaldi all built at different times and in different areas of the city to regulate the entry and exit of Milan.

Another interesting area is the area of Milan is Piazza della Repubblica, where is the monumental Central Station of Milan and the skyscraper called Pirellone, plus the nearby gardens called Indro Montanelli Public Gardens with ponds and waterfalls.

Everyone can enjoy a weekend or more of tourism in Milan, a city that offers tourists many opportunities of all kinds and for all tastes.

And if will be your first time travelling to Italy, maybe you are interested in knowing more about Italian gesture language…

Have you ever been to Milan? What’s your opinion of this Italian city? Share with us!